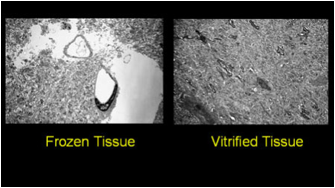 When your heart stops beating and you are pronounced "legally dead," an emergency response team from the facility springs into action. The team stabilizes your body, packs it in ice and injects it with heparin (an anticoagulant) to prevent your blood from clotting during the trip. A medical team awaits the arrival of your body at the cryonics facility.

Once you are transported to the cryonics facility, the actual "freezing" begins. Cryonics facilities can't simply put their patients into a vat of liquid because the water inside their cells would freeze. When water freezes, it expands -- this would cause the cells to simply shatter. The cryonics team must first remove the blood and replace it with a glycerol-based chemical mixture called  -- a sort of human antifreeze.

The goal is to protect the organs and tissues from forming ice crystals at extremely low temperatures. This process, called vitrification (deep cooling without freezing), puts the cells into a state of suspended animation.

Once the blood in your body is replaced with the cryoprotectant, your body is cooled on a bed in a cooling box, completing the vitrification process. Then, we gradually lower the body temperature toward the temperature of the liquid nitrogen- a process that will take a few days. The next step is to insert your body into a large metal tank filled with liquid nitrogen at a temperature of around -196 degrees Celsius (-320 degrees Fahrenheit). Your body is stored head down, so if there were ever a leak in the tank, your brain would stay immersed in the freezing liquid.